If something doesn't exist, it can't be detected

Sophism is a complex argument designed to confuse or mislead an opponent.

What is a virus? In a nutshell, it's a file that does something a criminal needs it to do.

A file monitor (in Dr.Web's case, this is SpIDer Guard) detects malicious files.

The Dr.Web SpIDer Guard component is incorporated into the Dr.Web Anti-virus.

The logic appears flawless, and yet it is flawed. Indeed, most malware species exist as files. However, some of them don’t.

For starters, there are worms—they existed at the very dawn of virus making. And what about rootkits? And malware for BIOS. Attackers never stop trying to escape the attention of this component, which is present in all anti-viruses.

There exists a special category of modern Trojans that security experts refer to as bodiless or file-less malware. They do not exist on an infected computer as separate files and reside only in the memory. To store themselves, they use various storage containers such as the Windows registry.

For example, the polymorphic malicious program Trojan.Kovter.297 creates several registry entries: one of them contains its encrypted body, while the other is a script that decrypts it and loads into the memory. The names of these entries contain special characters that prevent the registry editor from displaying them.

Actually Trojan.Kovter operates in the RAM of an infected system and doesn't copy itself to a disk as a separate file which, to a certain extent, complicates its detection and neutralisation.

It should be noted that although malware stores itself in multiple parts in the registry, and this makes it more complicated for a signature-based file monitor to detect it, the technologies incorporated into Dr.Web enable it to accomplish this task.

There are also other options. As you know, many modern solutions (Adobe, browsers, Microsoft Office) support macros, scripts, etc. — small programs. JavaScript is used on many sites to facilitate better interaction with users. The scripts are run by browsers and text processors and don't need to be saved on a hard drive.

The encryption ransomware Trojan.Encoder.4860 is written entirely in JavaScript and is spread as a JS file. To complicate its analysis, the code is obfuscated—its pieces are placed in a haphazard order to make it harder for signature-based analysis to detect it. As a distraction, the Trojan creates a Word document containing pieces of text from other files and opens it to convince the user that the document has been damaged. The library CryptoJS is used to encrypt files. 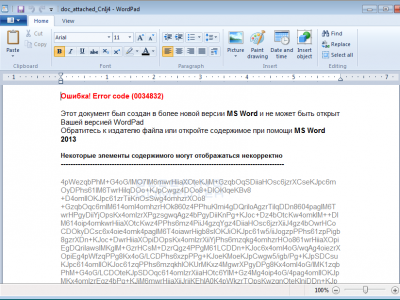 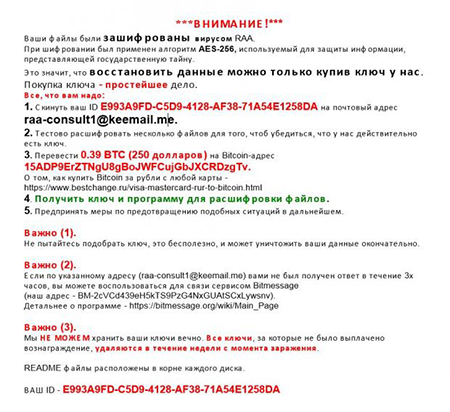 Attackers spread Trojan.Encoder.4860 with spam messages containing a .js file disguised as an Office document that the user is meant to open. In most systems, the script is run by means of Windows Script Host which provides it with access to all system utilities.

Learning to work with Dr. Web.
Comments to other issues | My comments