Other issues in this category (62)

How do criminals attack computers? The answer to this question, which seems obvious, can elicit bewildered shrugs. What’s so difficult about that question given everyone knows all the ways they can do this? Cybercriminals can send a malicious file (or a link to it) in an email. A user can download malware from the Internet (or a malicious script can be executed while a webpage is loading). Malware can be launched from removable media (such as a flash drive). The common attack vectors also include vulnerability exploits and software or firmware backdoors in recently purchased devices.

Those are threats that can be neutralised. But criminals have other options too.

How about regsvr32? This utility is a legitimate piece of software shipped with an out-of-the-box operating system. And it can accomplish a lot. For example, it lets criminals work with elevated privileges so that they can modify the registry and access files. That means these attackers don't have to write the code needed for these actions to be performed—they can take advantage of readily available utilities that have legitimate digital signatures and thus have the trust of system security mechanisms (such as routines based on application white lists). Furthermore, if an attacker can rely on standard utilities, the actual malicious file will be smaller and harder to detect.

By using legitimate applications and utilities, intruders can hide their activities in a system: even if the user decides to take a look at the list of running processes, they won't see anything new. This gives attackers enough time to accomplish their goals. This is how the Cobalt group uses regsvr32, msxsl, and wmic.

That is hardly a novel approach. Observant readers will remember us telling them about malicious scripts that utilise this very approach (some experts estimate that up to 52% of the attacks in 2017 involved PowerShell and WMI (Windows Management Instrumentation) code).

However, in this AVT issue we would like to talk about something else: the group of enthusiasts who decided to compile a complete list of the utilities, scripts, and libraries used by attackers. LOLBINs/LOLScripts/LOLLibs are, respectively, lists of binary files, scripts, and libraries that have no malicious features and usually get installed in target systems by default.

We already mentioned regsvr32. What other utilities appear on the LOLBINs list? For example, Msconfig.exe and Explorer.exe. And here you can find the complete list.

Any security researcher can contribute new items to LOLBINs/LOLScripts/LOLLibs.

How do security experts benefit from such lists? They can learn about applications whose activities may deserve special attention.

Unfortunately, using legitimate techniques is not the only way for criminals to deploy malicious code. Here’s what’s also in their arsenal:

We could go on, but meanwhile, Dr.Web 12 provides protection from attacks committed by criminals who leverage the capabilities of legitimate applications. Special heuristic routines have been added that facilitate the detection of LOLBINs/LOLScripts (Living Off The Land Binaries And Scripts) attacks. They are recognised by their specific behaviour patterns and during background and on-demand scans. 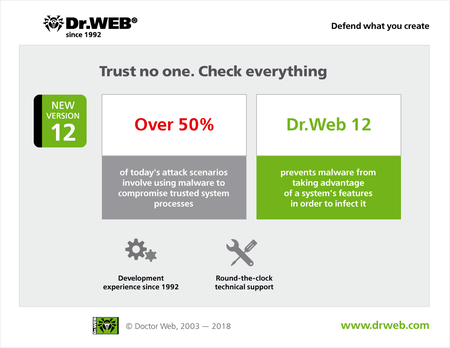 But maybe this does not apply to antivirus programs? :)

"Best the enemy of the good"

By using legitimate applications and utilities, intruders can hide their activities in a system

Really ways of penetration and infection of the PC, it became very much. Good thing there's a Dr.Web 12.
Comments to other issues | My comments