Recently, we told you about extensions and links. Even without delving into the intricacies of a Windows OS device, it’s clear that these are two vastly different, completely unrelated things. What will happen if we use them together? So, we mix, we shake, and...

Windows Vista, 7, 8 and 10 incorporate an interesting fine-tuning feature, the so-called GodMode. This mode lets users manage all the Windows settings via a user-friendly GUI menu. How can a user access this mode?

This folder will contain all the settings, including those not contained in the "Control Panel" or "Options" menu: 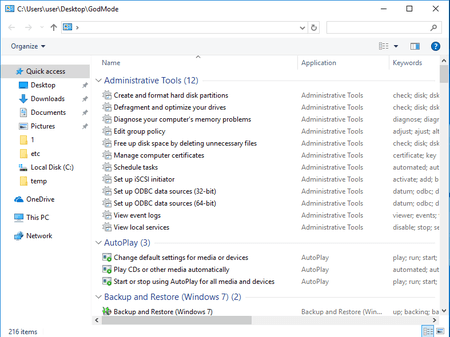 This feature is not very popular, but it is interesting. And attackers have come up with a way to exploit it!

The Trojan Dynamer writes its files to one of the folders available in GodMode inside %AppData%.

The executable is run on a command from the registry, but it is impossible to manually open this folder because the folder into which the Trojan ({241D7C96-F8BF-4F85-B01F-E2B043341A4B}) places its files acts as a shortcut to the settings "RemoteApp and Desktop Connections". 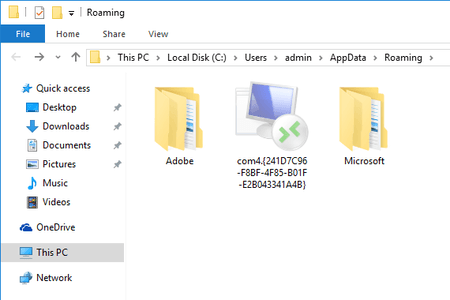 And here is the content of the folder if opened in Explorer.

So, we've got links; now let's add extensions. The fact is that extensions can be associated not just with certain types of files—they can also indicate that a file is a device. For Windows users this sounds strange (note: for Linux users it’s normal), but it’s actually a standard OS feature that makes it possible to address different things (files, memory, and many others) via a unified interface.

The authors of the Trojan prepended the name “com4" to the folder. As a result, Windows treats the folder as a hardware device. Windows Explorer cannot delete a folder with this name!

Similarly, it can not be deleted via the console.

Of course, it’s impossible to delete this folder manually. But an anti-virus can do the job!

An anti-virus can access different OS sectors—even those that cannot be accessed by ordinary users. It has to be able to do this in order to counter malware that hides its activity in a system.

That’s why only an anti-virus scan can drive malicious programs out of every nook and cranny of your computer.

When the cat’s away the mice will play

Tried to do so, the meaning of the function is only now understood:(
Comments to other issues | My comments