Search, find, and get infected

Some people think the Internet is just one big cesspool. Of course, those are the skeptics, but there’s no smoke without fire. The Internet is full of useful information, but no one can deny the fact that it has become a place where criminals feel right at home.

Search engines like Google provide access to one billion resources worldwide and process four billion to six billion user requests daily. However, how many malicious links are hidden in the search results? In 2015 and 2016, AV-Test, an independent German IT security institute, examined 80 million websites and more than 315 million tweets on Twitter in 2015, and another 200 million tweets in 2016. The resulting diagram, shown below, illustrates the increase in the number of links with malicious content that was detected for various search engines. 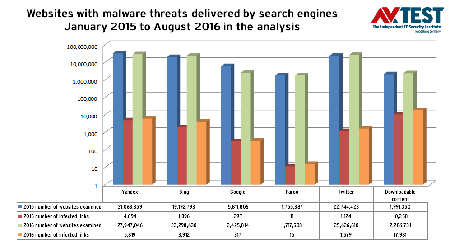 You can see that malicious Internet content is increasing from year to year:

According to the analysis, in more than 60% of the cases, the attack was carried out by loading a file, and only 40% of the attacks exploited vulnerabilities and implemented exploits in Java, Flash, and other components. The most common file formats used by malware are as follows:

And, in conclusion, we’ll reveal to you a little-known fact. You probably know that Dr.Web anti-virus products that filter Internet access use lists of resources that have been deemed to be malicious. But very few people know that those anti-virus products also utilize search results. When you do a search on Google, Yandex, Bing, Yahoo! and Rambler, the results displayed are only for websites that are safe (from the point of view of the search engines and Dr. Web). When enabled, the "Safe search" option makes this possible—unsafe content is filtered out by the search engines!

I agree with the opinion about the Internet.
Comments to other issues | My comments