And this is how the history of Dr.Web began… In 1992 Igor Danilov designed the first version of the Spider’s Web anti-virus, which incorporated the resident protection module Spider and the Web doctor (a scanner). It was the Web doctor that subsequently gave the entire family of anti-virus programs the name that has become famous all over the world: Dr.Web.

Less than two years passed between the release of Spider's Web and the emergence of Dr.Web on the market, but a lot of things happened in that interval. These include Danilov participating in the European "1&1" programmer contest in 1992 where his program won him a free stand at CeBIT'93; actually going to CeBIT’93 in Hannover; meeting Dmitry Lozinsky in 1993; and undertaking major work to improve the anti-virus.

This was right when virus making was evolving at a rapid pace—the first polymorphic virus appeared in 1993, and Dr.Web became the first anti-virus capable of protecting computers from threats of this kind.

The heuristic analyzer appeared in Dr.Web in 1994. Danilov's anti-virus was one of the few programs that could neutralise the Phatom-1 virus which was widespread at that time. 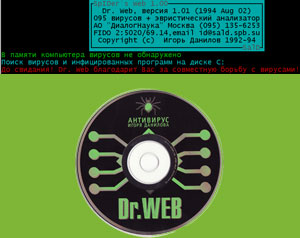 This is what the first disk containing Dr.Web and its UI looked like.

Dr.Web is proud to recommend its time-tested anti-virus, which has been developed by a team of talented programmers, to everyone wanting to protect their desktops and other devices. Happy birthday, Igor Danilov!
To vote, log in under your account or create an account if you don't have one yet.