The modern-day phone has gone far beyond being just a means of communication or an alarm clock. It’s a multi-purpose device that combines a variety of features―almost all the things that make us who we are.

Any self-respecting bank is equipped with a special mobile online banking application and encourages its customers to use its services. Online banking comes with many benefits. For customers, being able to use their mobile devices to immediately access their financial information is very advantageous. It’s advantageous for banks, too, because this decreases the workloads of staff and ATMs, which translates into money saved on maintaining the business. Going forward, banks will only continue to develop mobile technologies!

And cybercriminals understand this, too.

Smartphones and tablets used to carry out transactions have long been a favorite target of cybercriminals.

The mobile phone has become an object for attack by Trojans, especially banking Trojans.

Since Android devices are the most popular with customers, this platform is targeted the most.

In 2015, more than a billion Android devices were sold!

Malicious programs have been infecting Android devices for a long time. The first malware for Android appeared in 2011. The Dr.Web virus database contains the entries of more than 270 representatives of different banking Trojans, and even more Trojans were detected with the help of Origins Tracing™. In upcoming Anti-virus Times issues, we’ll describe the malicious activity of these Trojans, as well as how they penetrate mobile devices. 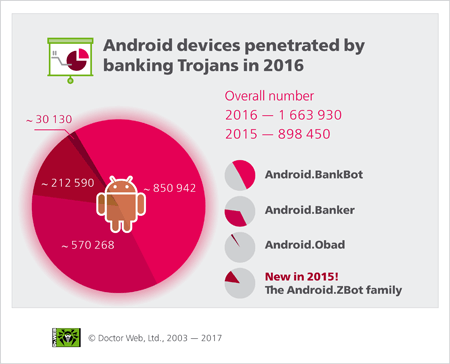 Graph showing the malicious activity of banking Trojans in 2015:

While taking full advantage of the present-day capabilities of mobile technologies, users must not forget to take elementary precautions.

You must use the full version of the anti-virus Dr Web Security Space for Android, and then make any payments in Internet banking.

Never use mobile online-banking applications via Wi-Fi in public places.

Do not use mobile applications for online banking via Wi-Fi in public places!
Comments to other issues | My comments