A hacking attempt is reason to act

Passwords leak into criminals' hands every day. Despite that, many people are still careless enough to use the same password for all of their accounts. Why’s that dangerous? If your password is leaked from a site you do not frequent (perhaps, you only signed in once!), an attacker may gain access to your other accounts and, as a consequence, to more important information.

And even if your passwords haven't been compromised yet, loads of people use weak passwords. And just by entering 'password', a hacker may gain access to a target account.

As a rule, victims learn about leaks later, after an attacker has already changed their passwords and is using their compromised mailboxes for spam mailings. But sometimes hacking attempts can be detected.

Today, just around closing time, I received an SMS, warning me that someone tried to hack into my Gmail account. The short message was as follows:

At first, I was somewhat perplexed. My first thoughts were about phishing or some kind of spam. I instantly switched to the Gmail tab in my browser and saw a similar email notification, which contained a bit more detail. Here is the email text:

We blocked the sign-in attempt to protect your account.

This is an automatic sign-in notification. Messages of this kind can be dispatched if a user has signed in from several different devices during a short period of time. But if you weren’t involved in this or the attempt originated from a different location, this may signal danger.

And it’s quite possible that the attackers may not even be trying to hack into your account specifically but are merely trying their luck with easy-to-guess logins and weak passwords.

Is there a way to protect accounts from attacks of this kind? The next example answers this question.

…and here comes a short message with a Telegram access code. 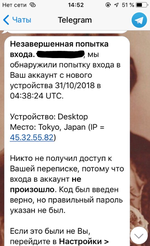 Someone successfully (!) entered a code from a short message but still failed to gain access to the account because they didn't have a two-factor authentication password.

I try to come up with complex passwords and periodically change them, thank you!

Recommendations, as always, useful! Thanks!

Passwords need to be changed occasionally. Thanks for the reminder!

I agree that attempted burglary is a reason to change passwords.
Comments to other issues | My comments