Many users know that anti-virus updates can affect any of the application's components, everything from the anti-virus databases to the drivers.

So if a user has refused to download the latest updates during installation, the download will start as soon as the setup process is complete—the Downloading files message will appear in the anti-virus's menu. 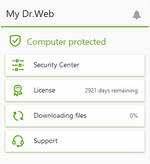 Clicking on the message will display update progress information. First, the files are downloaded: 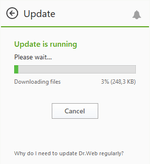 Then their integrity is checked—no hacker should be able to spoof anti-virus updates. 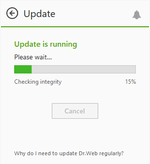 Most updates arrive silently—the updating module retrieves the databases and hands them to the anti-virus, which starts using them right away. But, from time to time, updates affect the anti-virus components that can't be updated without a system reboot — that's how the system is designed, and there’s no way around it. In cases like that users see the following prompt:

Interestingly, Linux advocates argue that the ability to apply updates without restarting the system is one of the OS’s advantages. It is, and at the same time, it isn’t. Indeed, the latest updates come into effect immediately, without a system restart. However, the applications that are already running will continue to use the previous versions of the files or libraries that they have been accessing. The data being accessed won't be overwritten completely as long as at least one process is using it. If you have updated a certain library file that is already being used, the loophole will persist, and an attacker will be able to mount an attack on the application working with the library! To delete the old data, one must restart all the applications that have been using it or simply reboot the system.

But let's get back to Windows.

Changes will take effect after the system restart. Users can close all of their applications and select “Restart now” to reboot the system immediately; they can specify when the reminder will pop up again or schedule a restart manually. To use either of the two latter options, first select Remind me later.

You can set the reboot time to occur within the next twenty - four hours.

If you restart the system on your own, the pending anti-virus update will also be applied. And here one can run into a problem—the very reason why we've decided to talk at length about this seemingly simple routine.

Should the user shut down or restart the system, updates will be applied as intended by the developers.

But if the user chooses to switch to sleep mode or another user account, the system won't be restarted and hence the software won't be updated.

The problem is that by pressing a button on their laptop or tablet, users aren’t shutting down the system but are switching it to sleep mode. Naturally, when they power on their device, they see the same reboot prompt again. And they become irritated because they seemingly have to power off their device way too often.

If the anti-virus is prompting you to restart the system, select the option Restart now. Switching to sleep mode or changing the user account won't get the software updated!

It is a good habit to restart the system when Dr. Web popup prompts you to.

The anti-virus components can't be updated without a system reboot.

Changes will take effect after the system restart :(
Comments to other issues | My comments