Is there a safe detour?

Let's talk about VPN, how it works, and what pitfalls may await users who want to use it to circumvent various restrictions.

A VPN (virtual private network) is used to establish a secure connection between two computers across shared and public networks. Employees can utilise VPN connections to securely access their corporate networks from home or during a business trip.

If you are using a VPN, all the traffic from your PC or mobile device is first transmitted to a remote VPN server over an encrypted connection and then relayed to the host you need to access. Thus all the nodes on the network between your device and the VPN server (including your home router and your ISP's infrastructure) can only learn that your device is exchanging encrypted data with a VPN server. The final destination of your data will remain a secret to them. 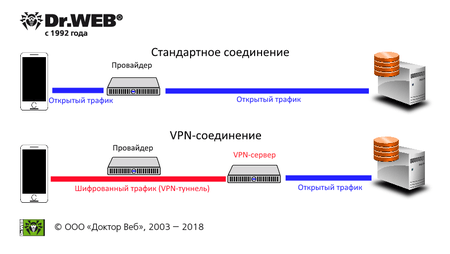 Sounds quite appealing, right? Yes, but only on one condition.

Only a trustworthy VPN server can help maintain the integrity of data and privacy because all the traffic from your device will be transmitted through it. Should the server end up in criminals' hands, they will be able to redirect your queries to bogus sites and harvest and analyse unencrypted data, including your personal correspondence and credentials.

As many as 18% of VPN applications don't encrypt traffic at all, thus making smart phones vulnerable to man-in-the-middle attacks; 84% of the applications leaked traffic, and 38% incorporated code that was classified as malicious by VirusTotal. Furthermore, four out of the 283 applications for Android studied also installed digital certificates that could be used to intercept and decrypt TSL traffic.

And a few words about security mishaps.

When it comes to maintaining anonymity on the Internet, even the most experienced hackers can blunder. The hacker going under the alias Guccifer 2.0 is a stellar example. He claimed responsibility for the cyberattack on the Democratic National Committee's servers and the subsequent leak of the stolen data to WikiLeaks in June 2016.

Kyle Ehmke, a security researcher at ThreatConnect, analysed the meta data in Guccifer 2.0's emails in an attempt to determine the true identity of the person behind the alias, but the tracks never led him beyond one server in France. However, Kyle Ehmke was able to determine that the hacker was using the Elite VPN service. One of the service's exit nodes does reside in France, but the company's headquarters are located in Russia.

According to the Daily Beast, Guccifer 2.0 supposedly failed to toggle on his VPN client before signing in and, thus, revealed his real Moscow IP address on an American social networking site. The media outlet doesn't specify what website the hacker visited, but Guccifer 2.0 was known to communicate with other people via Twitter and WordPress (both companies refused to comment).

VPN is a wonderful and reliable technology, no doubt.
But the security issue of its use is the most important one, and you can use public VPNs (and you need it if you need to use some NETWORK service, for example Telegram :), but only with the caveat not to forward private data.

There’s more than one way to skin a cat

Useful information, I will know.
Comments to other issues | My comments