When we hear a word that has several meanings, we automatically associate it with the meaning that is most usual for us. Agree: inveterate farmers or fishermen will hardly think of malware if somebody asks them about worms. And, in a hospital, conversations about viruses will most likely not be about computer ones (although, people can talk about them there, too). And what meanings come to mind when you hear the word "Trojan"?

Trajan was the name of a famous Roman Emperor. Several towns and villages have a similar name. There’s also the ancient and mysterious "Trajan walls". And the Trojan horse... Is that all?

When Trojans are mentioned, some people get reflective and look upwards. We’re used to the fact that in the Solar System everything orbits around something and moves along its own orbits—planets around the Sun, and satellites around planets. But, there exist objects that don’t have their own orbits. Guess what they’re called?

Trojan asteroids. In the Solar System (and indeed everywhere else) every object attracts other objects. And, at certain points the attraction is counterbalanced. Such points are called Lagrangian (neutral) points—in 1772, French mathematician and astronomer Joseph Louis Lagrange predicted the existence and location of two groups of small bodies that were under the influence of a pair of gravitationally stable points along the Jupiter orbit. At these points, located at an angle of 60° with respect to the orbital plane of Jupiter, a small celestial body is held under the influence of gravitational forces in an isosceles triangle in which the other points are the huge Jupiter and the Sun. The first Trojan was discovered in 1906. It was named Achilles.

For a long time within the Earth’s orbit, not one Trojan asteroid could be discovered. The fact is that usually Trojans don’t move far from the Lagrangian point, which is located at just 60°; for this reason, it's difficult to discover such bodies from the Earth—almost all of them fall on the day side of the sky and get lost in the Sun’s rays, and due to their extremely small size, it becomes very difficult to discover them. The Earth’s first Trojan asteroid (2010 TK7) was discovered only in 2010. Asteroid 2010 TK7 is a rock 300 meters in size that moves 60° ahead of our planet, in the Lagrangian point L4. 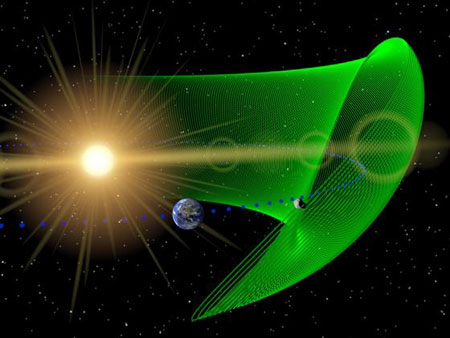 The asteroid’s movement around L4 in a half-cycle (a whole cycle equals 395 years) from the vantage point of an observer on Earth (the Earth is taken as the starting point, and it does not change its position). Due to the high angle of inclination and the large eccentricity of the orbit, the asteroid will move along a spiral (green), where one spiral corresponds to one year.

Not all Lagrangian points are filled with small bodies: as mentioned above, all bodies attract all other bodies, and besides Jupiter and the Sun, we must take into account other large objects. Saturn destabilises the Trojan asteroid system for Jupiter's Trojan points.

But who knows when the Earth’s inhabitants will enter space and mine extraterrestrial mineral resources. It’s entirely possible that the vehicles that will land on space Trojans will need to be protected against computer Trojans. And it’s possible that the job may go to Dr.Web! #history #names

There are many significant dates in human history. But only a few of them can compare with the great achievement of the Soviet people who not that long ago—on April 12, 1961—opened the way into space for humankind. The country that just 16 years earlier had experienced the most horrible war in its history, within a short time, rose from the ruins and achieved the impossible.

Our greetings to you on this anniversary! "Let's go!"—to infinite horizons!

Time and tide wait for no man

Хорошая историческая статья, весело.
Comments to other issues | My comments