Presidential elections were held recently in Russia, and as you can guess, we were expecting hacking enthusiasts to test their skills against the sites and systems involved in vote processing. Because of all the mass media hysteria about election interference, there could be some hackers out there eager to deploy a worm in a top-secret system.

But Dr.Web would be standing in their way…

GAS "Vybory" (Governmental Automated System for holding elections in Russia) is an automated IT infrastructure that facilitates various routines in preparation of and during elections and referendums.

The infrastructure's software and hardware are used to collect, process, aggregate, store, search for and transmit information.

The system's history started in 1994 with a presidential decree about a nationwide infrastructure for maintaining election events. In December 1999, testing was complete, and the system became officially operational in July 2000.

It is also worth mentioning what kinds of computers were to be used to run the first version of GAS "Vybory:

We were planning to use advanced hardware, including Intel 486 CPUs which were entering production abroad, and the Windows 3.1 OS whose localisation in Russian was specially ordered for the GAS "Vybory" project.

Naturally, the GAS "Vybory" designers also had to decide how their system would be protected from malware. According to project history, initially it was protected by a product whose name would hardly be recognised today:

But as time went on, anti-viruses on standalone machines became ineffective. Administering hundreds of thousands of anti-virus installations that aren't connected over a network is quite a challenge. All the more so since users love to disable their anti-virus, which often results in malware outbreaks. A remotely controlled solution became a necessity, and Dr.Web anti-virus developers were tasked with designing just that.

The programmers had been given a very difficult and challenging task—to develop anti-virus software for workstations and servers that would feature a centralised administration tool and function in the State Election System. One of the system components (the control center) was to be deployed at the Russian Central Election Commission and the other (designed to protect workstations) at the GAS Vybory network’s regional offices, which number in the thousands. The project (the first public beta test) was delivered to a state board of experts in early 2003. The first installation was performed in the testing environment of Voskhod Research Institute, the main developer of the State Automated System. The testing was successful, and the solution was deployed in the GAS "Vybory" system in autumn that year. It has been performing successfully ever since.

You will appreciate the complexity of the task that stood before the developer team if you take a look at the GAS "Vybory" structure:

It was designed as a multi-layer WAN connecting digital automation units. The IT environment was as vast and diverse as the entire Russian Federation's election system—the Central Election Committee’s automation units, as many as 85 machine clusters for the Federal Subject Election Boards, and over 2,700 automation clusters for local election boards. The machines within all the layers comprise a single information processing environment with its own data transmission and communication protocols. 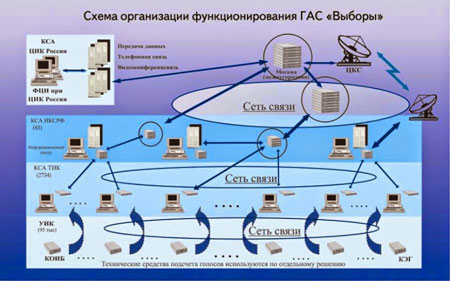 GAS "Vybory" facilitates over 10,000 election campaigns per year. The system's load reaches its peak in the run up to and during nation-wide election campaigns that are being held alongside regional and local elections—when the number of election boards may exceed 95,000.

GAS "Vybory" reaches literally every dwelling in Russia’s vast territory. Its coverage extends outside Russia—polling stations operate abroad too. An election commission can be located anywhere, and wherever GAS "Vybory" is operating, so also is Dr.Web.

On August 19, 2004, Doctor Web delivered another incarnation of the product: Dr.Web Enterprise Security Suite, a solution geared toward the anti-virus consumer market. It quickly became the "blue chip" among Dr.Web products.

When we are asked whether large companies can use Dr.Web Enterprise Security Suite, we usually point to GAS "Vybory" so that people can see how our little spider has been coping with this enormous task for many years.

Into every life a little rain must fall

Хорошо, что Dr.Web защищает.
Comments to other issues | My comments