From social networking to stabbing rampage

It’s a cute picture: a toddler who can’t even speak yet already poking a tablet with his finger. Alas, you don’t get to see the consequences: a child’s eyes red from crying, their parents having a hard time getting them to sleep, and a pupil's tantrums after having been banned from playing video games.

Parents find it easier to shove a smart phone (a state-of-the-art toy) into their child’s hands and forget about the child rather than monitor their child’s behaviour, play and take walks with them, and try to keep track of their interests. "We gave birth to our kids, raised them to be old enough for school, and now they're all yours" or "Since those holidays were your idea, you should be the ones to babysit them now" — some parents actually use just those words with school teachers.

It's no secret that going to school is stressful donkey work for many youngsters. Onerous home tasks, useless knowledge (who will ever remember what kinds of mineral deposits can be found in Patagonia?), and troubled relations with schoolmates.

And all these issues eventually add fuel to the fire of teenage rebellion.

Children crave the forbidden and seek revenge for pain caused to them.

The morning after the attack, anonymous worried parents discussed why their children were so interested in the attacker's social networking webpage.

When the tragedy happened, he only had five friends. But right after he assaulted a teacher with a hatchet and fired shots from an air gun, the number of his subscribers began to increase exponentially.

As many as four thousand teenagers managed to subscribe to the fifteen-year-old shooter's page on VK before it was blocked by the administration.

Is it possible to automate the blocking of such materials? Alas, it isn't. The artificial intelligence has yet to be created, and web-content filtering still relies on lists of known malicious URLs and key phrases that can or can’t be found on webpages.

Mikhail Pevnev's nickname on VK—Mike Klebold—is a reference to American Dylan Klebold, the idol of so-called columbiners. In 1999, Dylan Klebold and his friend Eric Harris organized the mass shooting of their classmates and teachers at Columbine High School in Columbine, Colorado. They wounded 37 people; 13 of the victims died. Afterwards, the teenagers committed suicide.

For several years prior to the killing spree, they had maintained a website where they published instructions on how to make explosive devices as well as lists of the classmates they wanted to kill. They also recorded videos of themselves stockpiling firearms and ammunition.

A tragedy may break out unexpectedly, but it starts with someone having seemingly harmless hobbies, and then people with similar interests appear among their friends. The person may visit sites devoted to weapons, suicide, etc.

Media outlets enjoy savouring the details. And children learn from the news how they can exact revenge on their offenders. They often disregard the fact that they are going to die or that innocent people may get hurt. They tend to regard it as some kind of TV show.

Thanks to nationwide publicity, Klebold and Harris gained followers. Some of them started calling themselves "columbiners". In 2000-2007, violent outbreaks occurred in the US states of Georgia (six wounded) and California (two people died, thirteen were wounded) as well as in Canada (one teenager died) and South Korea (thirty-two people were killed and twenty-five were wounded). Law enforcement agencies managed to prevent several other attacks. 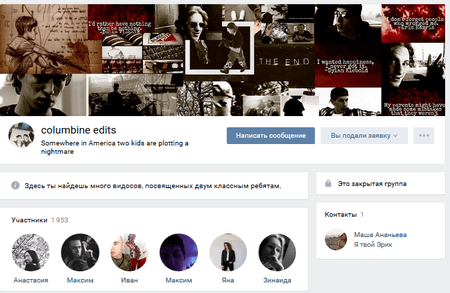 The Columbine edits community on VK has as many as two thousand members. The community description reads as follows: "Somewhere in America two kidss are plotting a nightmare". The community page features Harris and Klebold's videos and quotes from their journals.

The Ivanteevo shooter was an active member of another "columbiner" community with over two thousand members.

Its public section features more diverse content: in addition to recordings of Harris and Klebold, it features information about school arson incidents and violence against teachers. Teenagers often upload photos in which they hold weapons and strike poses similar to those of the Columbine killers. 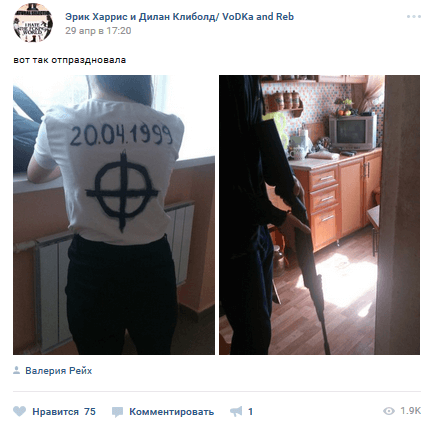 It is often (at least in the beginning) nothing more than a way to express protest.

The lifestyle, the clothes. For example, do your usually wear a raincoat?

But it got worse:

A young user posted a lot of videos related to the Columbine attack on their Vkontakte page. Those include videos filmed by Eric Harris and Dylan Klebold before the massacre.

Photos on social networking sites show one of the young men who participated in the fight, posing with an assault rifle.

And this is how it can end:

In the morning, several wounded teenagers ran to a shopping mall to notify a security guard about the incident. The guard pressed an alarm button. A Cerberus security team arrived at the site.

The first thing they saw were running children—some of them smeared with blood and wearing no overcoats.

The Anti-virus Times was created to provide people with information, including guidelines about how an anti-virus can be configured for maximum security. But if we care about our children, we can't rely on the Parental Control and other similar solutions.

Only parents can talk to their children about things that are important to them. Dr.Web can block access to information, but a child’s happiness and well-being is in the hands of their parents.

The young man had a good family but had run away from home on several occasions.

This phrase is used way too often…

"Dr.Web may block access to information"
And maybe it should!
You just need to configure it correctly.

The issue is interesting, but with a "philosophical bias", just suitable for discussion in the social. networks ...
A social. Networks - EVIL ???
What about the internet?
:(

You should take care of your child.

Also find troubling the lack of regular updates to this category since this article. Am sure many more articles could fall into this category as the children are an easy way to transmit the latest if their parents/guardians have not gotten them a program like this to begin with...
Comments to other issues | My comments