Waiting for a miracle

Health information is considered personal data. If hackers find out someone is suffering from some ailment, they can harm that individual by blackmailing them, manipulating them in order to derive some benefit; in other words, they can commit crimes.

Often attackers begin their search for information about someone’s ailments by analysing social media. After acquiring such information, they can, for example, send you a letter offering some sort of treatment. They expect that their e-mail will interest you and that you’ll open the attached document. As a result, instead of a treatment, infection awaits you: the data on your PC will be corrupted by encryption malware.

Another way to harm people who are suffering from some infirmity is to send them a spam message advertising useless or even dangerous medicine that can harm not only their wallet, but also their health.

Surely, more than once you’ve received e-mails about the miraculous/fast/easy/hassle-free (sometimes even free-of-charge!), etc., cure for an illness — the promise of a miracle. 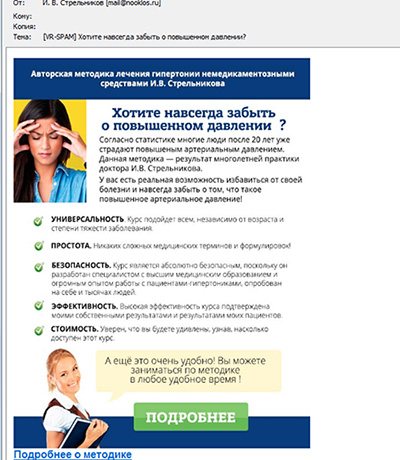 Any lie is immoral, but this kind of trickery is the perfect example of cynicism, because it feeds off the human fear of disease and physical and moral suffering, and the natural desire to recover as soon as possible.

You can't trust charlatans.
Comments to other issues | My comments