When, in 2007, Doctor Web released the first anti-virus for handhelds, malicious programs for mobile devices were so few that we committed ourselves to providing the application free of charge—we believed it was wrong to take money for something that protected devices against a possible future threat that barely existed at that time. Yet, we were also confident that threats targeting handhelds would emerge in large numbers. Later, other anti-virus developers followed our lead.

Just a short time has passed, and thanks to the tremendous popularity of mobile devices and the fact that one doesn't need a professional programming background to start writing apps for Android, the number of Android Trojans—and, more important, the number of infections caused by Trojans—is astronomical.

Graph showing how the number of entries for Android malware in the Dr.Web database has grown over time 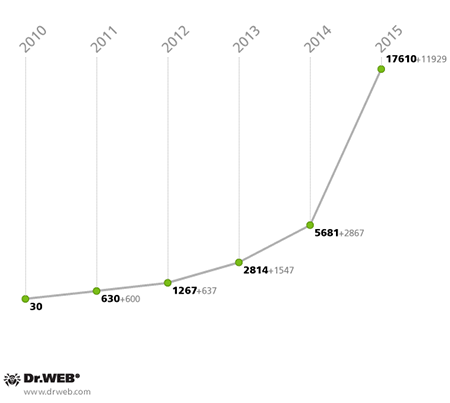 We conducted research to determine what features attackers implement in malware and what sorts of things they are after. And this is what we found.

Most malicious programs for Android are created to steal money and information.

And when it comes to theft in cyberspace, criminals are particularly interested in applications and services that are popular among users. Android is a prime example. The criminals behind Android Trojans steal whatever they can from compromised devices.

The activities of the most successful Trojan thieves can only be discovered after everything has already been stolen.

Users who have a commercial license for Dr.Web Anti-virus or Dr.Web Security Space have been enjoying our anti-virus solutions for handhelds free of charge since 2007.

And Doctor Web has no intention of changing that.

Dr. Web Security Space for Android is free to pair with the main PC protection! Good deal.
Comments to other issues | My comments