Darkness under the microscope

Media outlets claim that the darkest and most forbidden things on the Web dwell in the darknet. We already discussed this topic, and if you recently joined the Anti-virus Times, please allow us to remind you that the darknet is a common reference to websites whose location can't be determined by usual means.

For example, learning about the locations of ordinary sites is not that difficult (standard system utilities can provide you with IP addresses; then you can search for them in the public domain to determine their owners), but the standard methods won't work for sites on the darknet.

Unlike the Internet, which connects hosts all over the world, there is no single darknet. Instead, there exist several separate overlay networks serving different purposes. Collectively they are referred to as the darknet. The darknet’s distinguishing features include:

But that's an urban legend in theory. How does it work in reality?

Using the engine, security researcher Victor Gevers was able to identify security issues on a darknet site in a matter of minutes. The example site exhibited a number of opened ports that could be used to establish an external connection to it. According to the researcher, this information can potentially be used to mount a brute-force attack.

This site had exposed Telnet and SSH ports. Another port was intended for use by a web server run by Fritzbox routers. This indicated that the .onion site was being hosted on a router's web server or that someone's device was compromised to host the site.

This shows that darknet sites can be searched for and security researchers (as well as hackers) can attack them.

But let's get back to our main topic. Media outlets often describe the darknet as a universal and uncontrollable evil force. Is that the case?

According to Mascherari Press's report, the number of darknet sites shrank from 30,000 to only 4,000 during the last year. Data gathered using Ichidan confirms these figures.

Also note that the World Wide Web consists of almost a billion sites. Four thousand vs. one billion? That's not even a drop in the ocean. Well, but perhaps it is the darknet that is home to all the pornography, sites about drugs, etc.?

Internet Watch Foundation is a charity engaged in identifying sites showing child sexual abuse images. It cooperates with law enforcement agencies and ISPs to make sure that the content is removed from the Internet. Last year, it registered 31,266 URLs pointing to sites featuring child pornography. Of those, only 51 addresses were related to the darknet.

A minute portion of the content that is accessible elsewhere. Contrary to claims from politicians and the mass media, the darknet is not several times larger than the World Wide Web.

The conclusion is quite simple: the darknet does exist, but its danger is grossly exaggerated. Before waging war on the darknet, all the criminals and fraudsters on the Internet need to be dealt with.

Statistics show that the lion's share of criminal content doesn't reside in the mysterious darknet but rather on the Web, and Dr.Web Parental Control can block access to those sites.

To prevent your computer from accessing malicious sites, right-click on the spider icon in the

(the padlock will open 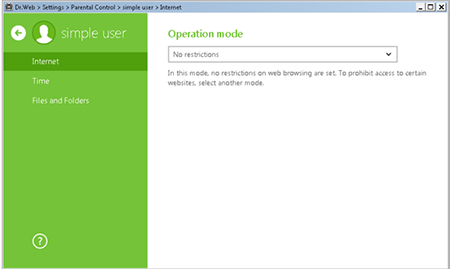 In the drop-down list, select Block by categories to restrict access to sites that fall within the predefined groups. If you select this option, you will be able to define thematic groups (adult content, violence, weapons, etc.) for sites you want blocked. Select the groups you need. 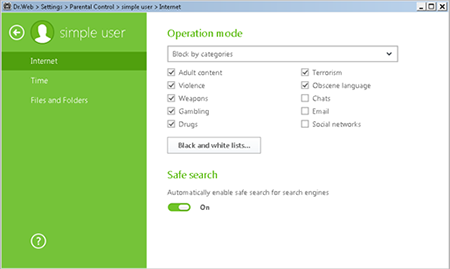 I use the Parental control function, it is convenient.