Little brother is watching you too

Joseph Heller — “Just because you're paranoid doesn't mean they aren't after you".

People who want to safeguard their lives from someone's prying eyes usually expect that the government or secret services pick them out as an object of interest. But this notion is somewhat outdated. In reality accessible high (and inexpensive) technologies make surveillance easier and more profitable not only for the big brother.” 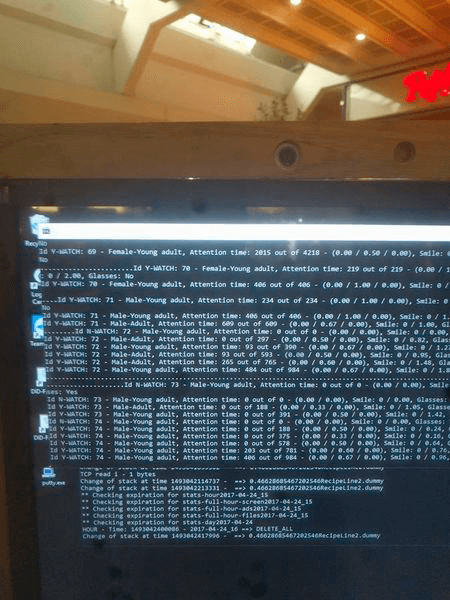 This screen in a small restaurant in Norway normally displayed ads, but one day something went wrong. Because of a glitch, a console appeared on the screen instead of ads. When the originator of this photo came closer to photograph the screen, new strings appeared in the console. They contained information about that person, including their age, sex, whether they wore glasses, what they were looking at and for how long, whether they were smiling or not… Anyone getting up close could notice the small camera on top of the screen.

Later it turned out that all this information was required to provide better advertising for the customers. For example, meat dishes could be displayed to men and salads to women. Furthermore, the relevance of different ads for various groups of people at different times could be assessed—a similar analysis is conducted by marketers using the Internet. However, the difference here is that everything is happening in real life where people can’t install plugins to prevent their data from being collected.

The legality of this technique has yet to be determined, but after a backlash from some Internet users and online articles, the smart analysis system was removed. For the time being.

Are these methods of analysis, which strongly resemble surveillance, legal? There is no simple answer. There are so many nuances to factor in, including the laws of different countries and how those specific laws are applied. And there is no single answer as to how the average person may respond to this. Some won't care, while others will deeply resent it. One thing is certain: all sorts of companies will be gathering as much information about users as they can, both in real life and on the Internet, unless company activities are monitored by a regulating body. Это нужно понимать – и вести себя соответственно. And everyone chooses for themselves how they’ll behave in such circumstances. In Japan, for example, some people wear masks to escape various tracking systems, while in hotel parking lots with hourly rates, visitors can use a special tablet to conceal their license plates.

On the Internet, special software can be employed to avoid tracking.

Protection of personal information in real life is necessary.