Make sure your device gets continuous support

Virtually everyone has heard the word 'audit'. Some of us know that audits are conducted by special people—auditors, many of whom are former accountants. And which of our respected Readers can define 'audit' and explain what it’s for? As far as anti-viruses are concerned, here is what we've come up with:

An audit is an unbiased examination of a computer by an anti-virus that aims to determine whether the device is secure and can maintain the integrity of the information it stores.

Let's talk for the umpteenth time about the security of Android devices. Android fragmentation is one of the problems we mentioned earlier. Unlike solutions from Microsoft and Apple, which are developed and updated by the same company, the platform from Google doesn't enjoy such consistency.

Google develops new Android versions, makes them available on new devices, and also provides the new releases to its partners. The latter modify them to tailor the system for their devices. As a result, although we may talk about Android 5.1, in reality the actual version depends on the particular manufacturer (Android 5.1. on devices from Google or Samsung…). Versions can differ significantly. By the way, it’s because the platform is open to modifications that third-party Android firmware containing malicious code is so common.

As a result, it becomes impossible to deliver a single security update to all devices: each manufacturer releases its own updates independently.

Google certifies Android-powered devices. If a device isn't certified, it can indicate that:

To check whether your device has been certified by Google:

If your device isn’t certified, it is recommended that you get in touch with its manufacturer and request that they provide you with a handheld that has been tested by Google.

Android version support is another update-related issue. As a rule, updates are released only for the latest OS versions, while older (relatively!) devices are left with unpatched vulnerabilities and the possibility of an upgrade to a newer version depends entirely on the device's manufacturer. #Android #mobile #vulnerability #Dr.Web_Security_Auditor

Because security updates aren't automatically delivered to many Android devices, it can be a good idea to use the Dr.Web Security Auditor. This component is included in Dr.Web Security Space for Android, but it is not available in the free Light-version. 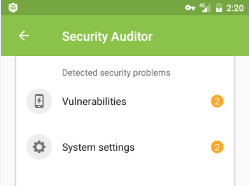 You must use the full version of anti-virus Dr Web Security Space for Android.

Does Dr Web Protect me from Ransomware?? I have Posted Dr Web on face book and Bragged on it