A trap for players?

Many operating systems exist for mobile devices. But, when was the last time you remember reading a news article about malware for, say, BlackBerry? Meanwhile, news feeds are full of reports about Trojans for Android. Why is that? Because Android devices enjoy worldwide popularity. The impact of Android and BlackBerry Trojans in a system can't be compared.

Because Trojans aren't viruses and can't replicate themselves, virus makers are devising new ways to lure users into distributing them.

One such way is to make Trojans available in the guise of popular games on third-party sites. What’s needed to distribute Trojans on a mass scale? A great idea and as many targets as possible. The augmented reality game Pokémon GO became just such an idea.

News feeds were literally flooded with messages related to Pokémon.

In the screenshot, you can see players from the green faction, located in Istanbul, seizing check points and connecting them. 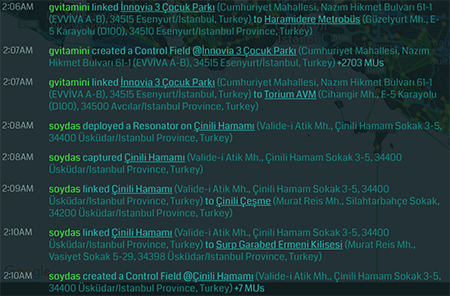 There were news posts about players walking among protesters and complaining that they were interfering with the game!

The game has caused several accidents.

The game was released in just a few countries on July 4, 2016. And July 7saw the first reports of criminals taking advantage of people's fascination with the game.

Attackers spread the malware DroidJack (Android.Spy.178.origin in Dr.Web classification) under the guise of Pokémon GO. They took advantage of users' urge to download the game before its official release in their region. This information was revealed by security experts from Proofpoint.

They remarked that the malware was able to control the infected devices and steal personal information. Altered versions of the game were distributed over third-party application catalogues and repositories.

Information about your actions that the game can record may enable other people to find you, track you, and use the data to take advantage of you.

In New York, a girl caught her boyfriend cheating on her thanks to Pokémon GO.

Evan Scribner was at his ex-girlfriend's place in Bushwick (a Brooklyn, New York, neighborhood) and was careless enough to start Pokémon GO and catch a monster there. …The application stores data and the exact location where each Pokémon was caught. …That's how his current girlfriend accidentally noticed that one of his latest catches happened near Scribner’s ex's house.

Also, Pokémon GO can be used to lure teenagers into traps where they can be robbed.

…several people set a landmark in Pokémon GO to lure unwitting gamers into a secluded area. Armed robbery was the result.

The game can also be used for self-adulation.

I don't like Pokémon GO, a dumb waste of time.
Comments to other issues | My comments