Other issues in this category (78)

Let your anti-virus supervise all operations

Operating systems and applications tend to do their own thing and don't give PC and smartphone users many hints about their activities. Applications contact their updating servers independently, and freeware requests and downloads advertising content.

And, you’re wrong to think that, by viewing your browsing history, you’ll learn about all the hosts your computer’s sent requests to.

For example, here is what Dr.Web statistics show while Mozilla Firefox is being launched: 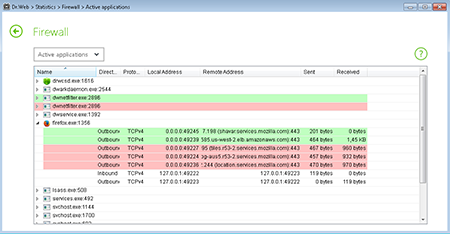 In the course of my work, I often look through HTML and JavaScript code. Once I noticed a third-party script in the source code of a web page.

As a rule, the fact that their anti-virus contacts cloud servers and updating servers comes as a revelation to users.

Naturally, once installed, the corresponding utilities can track all requests made to servers on the Internet, but let's be realistic: without publicly available software specifications, it’s impossible to determine how legitimate an application’s activities are.

But this is not the real problem. Typically, legitimate programs do not contact malicious servers. Furthermore, the behavioural analysers of anti-virus software products are standing guard and in possession of lists of sites that applications can access. But one day something unexpected happens…

Apparently, the company merely failed to renew their domain name registration and cybersquatters took advantage of it. Both domain names were registered to an anonymous owner who made them available for sale for $2.5 million per name.

Companies often neglect to renew their domain name registrations—even Google managed to do it. And, although squatters can't make any advance preparations, they can quickly get hold of a domain name and sell it to fraudsters. As a result, users can find themselves in a situation when their programs are contacting servers that are no longer legitimate.

Lots of information.
Comments to other issues | My comments