Everybody knows this football chant. So do criminals, but they use it for an entirely different purpose.

An interesting technology that lets different programs use a common interface in order to work together. However, the versatile routines of popular solutions are also a boon for cybercriminals. As part of Microsoft Office, the technology can be used to embed malicious VBScript or JavaScript code in documents that will eventually be sent to users.

The malicious programs (detected by Dr.Web as VBS.DownLoader.663 / VBS.DownLoader.648) use legitimate functionality to create links to Office and OLE objects that deliver malware into target systems. Bogus documents are distributed with emails that make use of social engineering tricks to lure users into allowing objects to be used in an Office document.

Inserted into the document is a huge icon that users need to click in order to unlock the content. Clicking on it brings up a prompt that requests permission to run JavaScript or VBScript code. 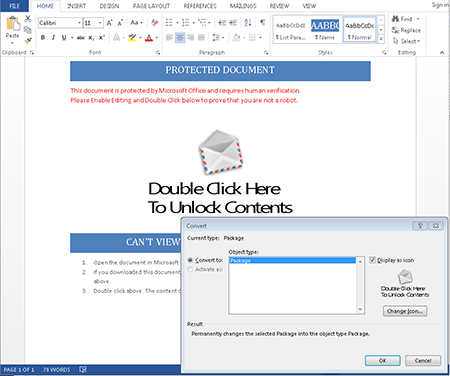 This attack is similar to those that employ malicious macros, but most users know that those should be disabled. Meanwhile, few know about OLE, so cybercriminals often have success with it.

Malicious code is often encrypted, a measure taken by cybercriminals to complicate its detection.

Criminals have employed features of legitimate programs in their attacks before. For example, they have often used Visual Basic for Applications in Microsoft Office. What makes this attack particularly dangerous?

Linux advocates believe that switching to this platform solves all problems with malware. However, Windows emulators are used to launch its applications under Linux—including Microsoft Office. And, under certain conditions, code that has been designed to run as part of a certain program and use its features can operate across different platforms. Incidents of this kind have already happened–take Java.Adwind.3, for example. Because it was written in Java, it became a cross-platform application. This backdoor ran under Windows, OS X, Linux and Android. It only needed JRE (Java Runtime Environment) to be installed in the system. Its array of features was quite impressive for a cross-platform program:
It could download, update and run other malware; display notifications; and process URLs. The backdoor also supported plugins that could be used to introduce new features. #security #technologies

To protect your system from attacks of this kind, it is recommended that you make the following changes in the Windows registry:

Wait for the cat to jump

Dr.Web Security Space is a great solution.
Comments to other issues | My comments