Snared in the net

A global crime against the human psyche code-named “10 little soldier boys”, or how Pokémon characters are killing players

We do understand that after reading this issue, some of our readers may recognize themselves in the description below and never read the Anti-virus Times again. However, we feel obligated to write about this topic anyway. An anti-virus is meant to RESIST evil and defend the defenceless from it. That's why doing nothing is not an option for us. This issue is our contribution to the Resistance.

Pokémon is a combination of two words: “pocket” and “monster”— “pocket monster”. The augmented reality game Pokémon Go, which is available for Android, iOS and Apple Watch devices, features such characters.

There is more to this somewhat unusual game than meets the eye. And as each player “rounds the corner”, a surprise awaits them…

In a healthy and curious but somewhat immature individual (or a child), Pokémon Go can induce psychological trauma because the game says to a player:

In other words, by appealing to the underlying hunter’s instinct within all of us, the game can alter someone’s mindset so that instead of striving to preserve all that is good in the world, they become hell-bent on its mindless destruction.

A hunter’s instinct has ensured human survival since ancient times. It makes us even more rigid as people, already feeling battered by work problems, money problems, broken relationships, and other disappointments.

If you delve into psychology, rigidity is followed by:

So what game are your children actually playing?

The game makes use of hypnosis, too. It immerses the user in a Pokémon world full of special effects where a spoon can be bent with the mind and telekinesis is possible. In a way, people who play the game are returned to their now distant but happy childhoods when they were full of vigour and energy. But, this world is an evil one that captures the minds of severely or borderline mentally ill players who are eager, at least in a game, to become all-powerful beings. But inevitably they confuse the game with reality, and do harm or even irreparable damage to the world around them.

And right nearby—within arm’s distance—are people who are completely oblivious to them.

The game also has a huge impact on associative thinking: if you (a bystander who finds yourself near a player engaged in killing monsters) look like a Pokémon, a player immersed in the game who is endowed with supernatural abilities, may try to catch you. And this increases the risk of citizens being robbed in the streets and stimulates an adrenaline rush in the person playing the game: they’re excited by the thrill of the chase and the feeling of being omnipotent, a combination that may push some people into committing real crimes

A compulsive urge to play the game and obsession belong to the same group of psychological dependencies. The game can stimulate a user’s excitement, making them dependent on it. Once that happens, the user loses control over their craving to play the game, and a full-blown obsession develops. When people are obsessed about something, they become easy targets for manipulation. By positioning Pokémon characters in the locations that suit them, attackers can create real traps or implement other schemes

How can I use him?

Did you ever wonder how information acquired in augmented reality mode with a device’s camera can be exploited? Images of terrain, combined with location data, can provide criminals with volumes of information about you (your home, plans, and places you visit regularly), much more than Facebook can. And this information can catch the eye of bad people. And this information is also collected, stored somewhere, and probably analysed. At some point, it will probably be put to use.

The most advanced players (those who’ve become disconnected from reality) associate their loved ones with Pokémon characters. How else could it be? They've got to keep practising! The game has become their life, and reality is their training ground. They feed candies to their targets, spend a lot of time tracking them, and perceive their younger brothers and sisters as Pokémon decoys. Subjecting people to danger becomes part of the game, strategizing, and having fun. "We didn't mean any harm; we were just playing"—that's what they usually say later to their parents and the police…

Naturally, a player can withdraw from reality, a phase where they focus on Pokémon instead of their studies or work and lose their personality. Indeed, why work when you’re surrounded by so many Pokémon targets and other interesting things to do? Education, work, and a decent amount of sleep appear to be a waste of time for a real Pokémon hunter. However, the hunter then becomes victim, and at that point it may already be too late to undo the damage (they’ve lost their job, they’re failing their studies, and their prospects in life have become bleak and non-existent… but there are still Pokémon to catch!, although even they may have lost their relevance given everything else that’s gone wrong).

When one becomes afraid of losing and becomes worse than others at playing the game, suddenly all kinds of phobias appear. Phobias shut down and control a person. They make people secure their doors with dozens of locks or do the opposite and leave their doors wide open.

"And what if a Pokémon attacks us? At first I dreamed about catching them, but who can stop them from trying to catch me?—they are part of my new world".

A 14-year-old teenager at an appointment with a psychiatrist.

A competition with no prize. The competition is flawed, because there is nothing to compete for and no rules exist. There are no referees or limits of any kind. Games without rules are very dangerous, aren't they?

They exploit our desire for more, which can make us psychologically dependent. In this respect, teenagers are among the most vulnerable categories of people. They need everything, and everything is important to them. By catching Pokémon, they can get “everything” that comes with doing that, but it won't include what they really need: real life projects and prospects.

As the game alters one's consciousness (the phenomenon is the subject of Victimology which studies relationships between victims and offenders), they start perceiving the world as a place where strong hunters kill weak victims. This poses a huge risk for society and may cause a lot of problems. The only people who can benefit from this are those who have already ruined their lives and enjoy the idea of someone being in more trouble than they are.

And what will happen at the end of the game? Will there be a tragic finale involving lots of people who end up as victims? Surely, the excitement around Pokémon Go won't last forever. Maintaining player interest for a long time is rather difficult—and it can only be achieved until we start hearing about incidents with bad outcomes or until a player comes across a truly wise man and heeds his words of warning. After that, anything is possible: uncontrolled mobs of people whose eyes are locked on the screens of their gadgets, and feelings of fear/excitement / obsession—this is an explosive mixture, indeed.

If our description of the game’s negative psychological impact doesn't convince you, you may want to think about the fact that really good hackers can track your activities through your account and take a big interest in your income and the money you spend playing the game.

And when all is said and done, what will you be left with? 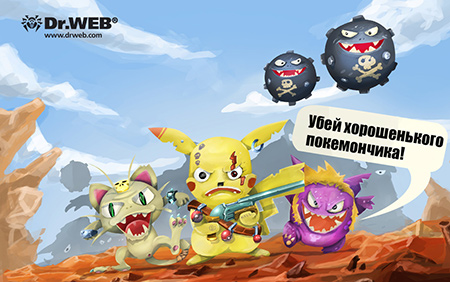 Never played Pokemon Go and not going.
Comments to other issues | My comments