In the now distant year of 1988, a virus infected a machine in the Main Computing Center of the USSR Council of Ministers’ State Planning Committee (Gosplan). Who knows—maybe, if this hadn't happened, anti-virus software would have evolved quite differently in Russia. 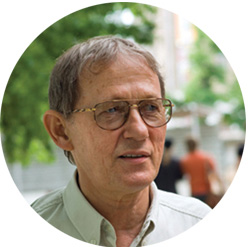 This is how he remembers it.

"At that time, I had heard about computers and viruses, but the first virus I ever encountered was Vienna-648 in 1988". The virus managed to sneak onto a Gosplan machine. Naturally, people were at a loss. They came to me and said: "Something strange is happening to the computer". I checked it out and realised that we had a virus on our hands. At home, I spent an evening figuring out what exactly was going on and wrote the first anti-virus. I named it after the first Soviet AIDS testing method which had been excitedly announced over the radio around that time. I translated it into English as AIDStest.

So that’s how the first version of the Russian anti-virus Aidstest appeared. It was used on virtually every PC in the USSR and later in the CIS, and stayed ahead of its competitors for years.

Only with the emergence of polymorphic viruses did Aidstest become obsolete and end up being replaced by Dr.Web. But that’s another story.

At the dawn of the PC and Internet era, a single individual could create and keep an anti-virus program up to date. Today, anti-viruses comprise an entire industry and cybercriminals rarely operate alone.

The anti-virus icon in your system tray represents the coordinated labour of many professionals, and only a small portion of their work is automated. The fight between viruses and anti-viruses has long ceased to be a confrontation between individuals and has become a technology race. And the ordinary user stands no chance of stopping malware without the help of an anti-virus.

Smart people, big plans.
Comments to other issues | My comments